Billionaire tycoon Roman Abramovich has declared victory in the first round of legal proceedings against a controversial book that claimed he bought Chelsea Football Club on the orders of Russian President Vladimir Putin.

In a statement issued on Wednesday, a spokesman for the businessman said a British court had ruled in his favor against Catherine Belton, the author of ‘Putin’s People’, and its publisher, HarperCollins.

Rola Brentlin, the director of corporate affairs for the West London football club, which Abramovich purchased in 2003 as part of a deal reportedly worth $187 million, welcomed the decision.

According to him, the judge ruled “that the book ‘Putin’s People’ indeed makes several defamatory allegations about Mr. Abramovich, including false allegations about the nature of the purchase of Chelsea Football Club.” 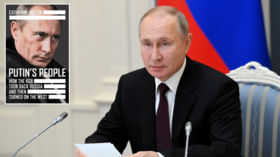 “We are pleased that the judgment has found that the book carries a total of nine defamatory allegations against Mr Abramovich, in line with the arguments in Mr Abramovich’s initial claim,” they continued. “Today’s judgment also rules that these allegations are allegations of fact and not an expression of opinion, as argued by the defendants.”

The Russian businessman, estimated to be worth more than $14 billion, announced he would bring the lawsuit in March this year. According to his legal team, ‘Putin’s People’ “falsely alleges our client has acted corruptly, and makes also claims about our client’s purchase, and the activities, of Chelsea Football Club.”

The book claims that the Russian-Israeli business mogul shelled out millions for Chelsea as part of a Kremlin-directed campaign to improve the country’s reputation overseas.

Belton, a former Moscow-based correspondent for the UK’s Financial Times, received glowing reviews from Western media colleagues for her debut tale, in which she alleges that Putin has woven a shadowy network of influence, binding together ex-KGB officers, oligarchs, and the Russian state.

Veteran Kremlin critic Anne Applebaum described the book as “the definitive account of the rise of Putin and Putinism,” while The Guardian wrote it up as a “fearless and fascinating account.”

However, at the same time, a number of critics panned the book and questioned a number of its revelations based on unverifiable claims from opponents of the Russian government.