Russian citizens have poured some $67 billion in cryptocurrency, a senior lawmaker has revealed as the country’s authorities are weighing options to regulate the booming market. A blanket ban is reportedly considered as an option.

The eye-watering sum invested by Russians into assorted crypto tokens was revealed on Monday by Anatoliy Aksakov, the head of the State Duma’s committee on financial markets.

“According to certain estimates, some 5 trillion rubles [$67.3 billion] have been invested by Russians,” the lawmaker said during parliamentary hearings. 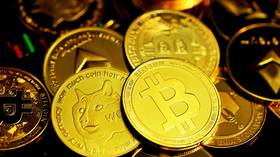 The cryptocurrency market, which remains largely unregulated in Russia, has been particularly popular among amateur investors, Aksakov noted. The country’s authorities must decide what to do with them, outlining clear rules and regulations for the market, he stressed.

“We need to make a final decision on cryptocurrencies. We need to decide how we treat them and, accordingly, clearly spell out penalties in our legislation should we restrict or prohibit something,” Aksakov argued.

Russia’s authorities have demonstrated a mixed attitude towards cryptocurrencies, with Deputy Finance Minister Alexey Moiseev stating back in October the government had no plans to ban them or prohibit use of overseas-based crypto wallets. Plans to tax token mining, while establishing it as a legit business activity, have been reported by Russian media.

Last week, Reuters reported the Central Bank of Russia has been seeking to impose a blanket ban on cryptocurrencies, with sources describing the regulator’s stance on them as a “complete rejection.”

The Central Bank’s stance on the tokens was explained by the regulator’s head, Elvira Nabiullina, shortly after the report emerged. The official confirmed she was against the cryptocurrency trade, however she fell short of publicly calling for a blanket ban.

“You know our attitude towards cryptocurrencies, that is, to put it mildly, skeptical,” Nabiullina told a press conference on Friday. “There are big risks for small investors due to high volatility, cryptocurrencies are often used for illegal operations, criminal in their essence, they are not transparent, so we cannot welcome investments in such assets.”

Previous Post: Russia could ban sentient killer robots
Next Post: No reply from US to NATO demands – Russia