A Moscow court has upheld a provision enabling schools to bar students without a valid Covid test from classes. The controversial rule is enforced only by a handful of institutions, but it may be expanded to further facilities.

On Wednesday, Moscow City Court gave its opinion on a case brought by the parents of a schoolgirl who had been barred from going to school over her lack of a valid coronavirus test. 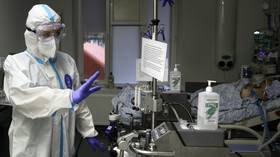 ‘No end in sight’ to Covid-19 pandemic – Kremlin

The plaintiffs challenged multiple provisions of a decree enacted by the educational authority of Russia’s capital back in October. The document tightened up coronavirus testing rules, allowing schools to bar pupils, whose parents prohibit them from taking Covid-19 tests, from classes. The rule has not yet been universally adopted across the city, however, with the system currently being tested at ten select schools.

The court dismissed the allegations raised by the girl’s parents that the decree somehow violated her right to have access to education, ruling that the provision was aimed at Covid-19 prevention more than anything else.

“The provisions do not deprive students of the right to receive education, but are only aimed at temporarily limiting access to organizations carrying out educational activities,” the court’s ruling read, as quoted by TASS.

The court upheld other provisions challenged by the plaintiffs as well. Namely, the court ruled it was legal to carry out a mandatory coronavirus test once every two weeks among school students. The express testing is not a medical procedure per se, the court said, thus it did not require parents’ approval as had been argued.

“The court did not find grounds for declaring the contested part of the decree invalid and fully dismissed the plaintiffs’ claims,” the court’s press service told TASS.