Belgrade seeks to find “understanding” in Moscow during an upcoming meeting with President Vladimir Putin, Serbian President Aleksandar Vucic said on Tuesday, adding that the talks will involve discussion of a vital new gas deal.

Serbia expects to increase its energy consumption to support its rapid economic growth, Vucic told journalist Vladimir Soloviev ahead of his upcoming visit to Moscow. The Balkan nation has already more than doubled its consumption, he added.

Vucic said “that natural gas is the biggest issue for us in Serbia,” and steady and friendly relations with Russia, as well as Belgrade’s participation in the Turkish Stream gas pipeline project, are important to his government. 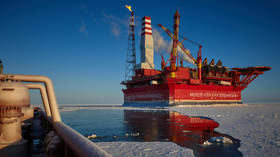 “Without Russia, there’d be no pipeline. There’d be no gas,” the Serbian president stated, adding that his nation would have to pay “€800-900 for gas today.”

“Economically, Serbia can’t handle it,” he said, adding that he hopes to negotiate another gas deal during his Moscow visit.

The president expressed hope that the sides will find “the best solution” regarding the price and volume of the gas, as well as price ‘flexibility’, which would help Serbia import “more gas without having to pay a much higher price” in the winter.

“President Putin has always shown understanding, even under more difficult circumstances. I hope this time he shows understanding again,” the Serbian leader said, noting that “peace and stability” are just as important for Belgrade as having a good gas supply deal.

Vucic also expressed concern about the recent tensions in relations with Kosovo, with the latest escalation seen just this September. “I will fight for peace practically at any cost,” Vucic insisted, adding that his nation will do its best to avoid conflict. Nevertheless, the situation in the region is “not easy,” he said.

“This is another reason why this meeting with Putin is so important,” he stressed, adding that it is crucial for Belgrade to have “this stabilizing relationship with the Russian Federation” since Moscow has always supported peace in the Balkans and repeatedly called for international norms to be observed.

The two leaders are expected to hold talks on November 25.