Russia’s Sputnik V Covid-19 vaccine has proven to be highly effective and safe in the age group from 12 to 17 during clinical trials, one of its leading developers has told RT.

The phase one and two clinical trials enabled a safe dosage of the formula to be determined for teens, which is 1/5 of the adult dose, Denis Logunov, the deputy head of the Moscow-based Gamaleya Institute which developed the Sputnik V, explained, in a segment broadcast on Wednesday.

“The kids tolerate it not just well, but very well,” according to Logunov. The vaccine has shown a higher immune response in children than in adults, as well as an almost complete lack of any side effects. 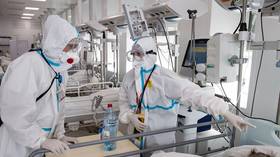 “This means that we’ll be able to protect all those who want to [get it], in the 12 to 17 age group,” from Covid-19, the researcher said. The coronavirus poses the most danger for the elderly, but severe cases are also possible among children, he noted.

Logunov also spoke about Russia’s immunization strategy, which is now focused on the third dose of the vaccine. This approach was chosen based on local and international experience indicating that booster shots effectively restore immunity, which reduces over time after the first two shots.

He also said that Sputnik V is effective against the new strains of the virus, and currently does not require an update. However, the Gamaleya Institute constantly monitors the various strains in order to make swift changes to its vaccine platform if necessary.

So far, around 37% of the Russian population has been double-vaccinated against the coronavirus. Those numbers could be boosted by the introduction of a nasal
vaccine, which is also being developed by the Gamaleya Institute.

Logunov said he is optimistic about the prospects for the nasal formula, saying it could become available as soon as next year – and due to its non-invasive nature, the clinical trials should take less time, and could be completed in the first three to five months of 2022.