The standoff across the border between Belarus and Poland is escalating, with 12,000 of Warsaw’s border guards, soldiers and police facing several thousand refugees, and Minsk’s security forces, on the other side of the frontier.

Now, as groups of desperate people do their best to cross over the inhospitable terrain and the barbed wire, Poland has officially closed a border crossing point at the village of Kuznica. There are reports that some refugees have forced their way through in other locations.

The Polish government and even the center-right opposition have invoked the prospect of NATO support. Meanwhile, EU politicians are imposing additional sanctions on Belarusian officials and are threatening more, including on “third parties,” and on airlines accused of flying the refugees into Belarus. 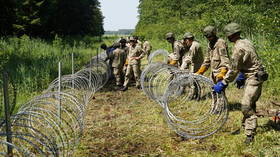 How to demonize a refugee: Western media is proving it only cares about desperate people if they serve the right political purpose

The refugees, often but not exclusively from Afghanistan and Iraq, seek to enter Poland, either to ask for asylum there – as is their right under international law – or to move on to other countries of the European Union, for instance, Germany. Poland is refusing to let them do either and is engaged in illegal pushbacks to keep them out. At the same time, Belarus is accused of facilitating the refugees’ travel first to Belarus and then on to the Polish border, setting them up for confrontation and rejection.

Then, according to observers, Belarusian forces refuse to let them retreat. The result is deadlock, stranding the refugees, in effect, between the two countries. This has been going on already for several months, as the crisis began in the summer.

For most analysts, the motive of Belarus’s dictator Alexander Lukashenko is clear. He seeks to retaliate against the EU and shake its sanctions policy, imposed over the alleged manipulation of last year’s elections, the subsequent suppression of popular protests, and interference with an international flight to arrest oppositionist and far-right activist Roman Protasevich. Lukashenko may be denying the obvious now. But in the past he has clearly, if implicitly, admitted it with a wink and a nudge.

The motives of Poland’s leadership, dominated by the nationalist-populist PiS party with strong illiberal tendencies, are no less obvious. It seeks to uphold long-standing Polish policy of not accommodating migration, except when the migrants are white and suit Polish-nationalist preferences. And so, Belarusians escaping from Lukashenko and Ukrainians fleeing a struggling, impoverished, country riven by conflict are welcome. Iraqis and Afghans trying to flee from political instability and war created by Western intervention, much less so.

Moreover, PiS relies on many voters averse to foreigners or, again, at least those with skin darker than that of the average Pole. Repelling refugees is also yet another populist play for electoral support. In continual conflict with Brussels over their attempts to undermine democracy and the rule of law at home and, recently, in the EU in general, Poland’s PiS-ists are also welcoming the opportunity to grandstand as Europe’s bulwark against both migrants and Lukashenko’s pressure.

At least 10 refugees – and most likely more – have already died, some freezing to death. While Polish government propaganda seeks to depict them as largely young men, in reality there are also many women and children. With temperatures dropping further, more deaths from hypothermia are inevitable if the refugees are not let in to receive adequate humanitarian assistance and exercise their right to have their requests for asylum properly assessed. 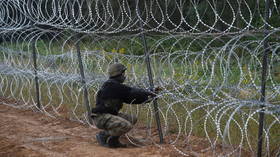 A convenient crisis? The EU’s new refugee ‘war’ is being used by Poland’s government to crack down on democratic rights & freedom

At the same time, the Belarusian-Polish standoff is not only producing massive human suffering, but also increasing the risk of international confrontation. Polish leaders have long used reckless rhetoric, hysterically invoking the language of war, national emergency, and a messianic mission to save all of Europe. In fact, they have imposed a legally ill-founded state of emergency along the eastern border to support their fear-mongering and shield their actions from scrutiny.

Unfortunately, they have largely gotten away with this Polish version of “politics of tension,” spreading panic, resentment, and conflict. In essence, the EU has not only accepted their factually wrong and morally repugnant narrative but made it its own. While rightly denouncing Lukashenko’s “gangster methods,” it finds no serious words of criticism for Poland’s brutality toward the refugees. Instead it and, increasingly, NATO as well are bending over backward to assure Poland’s nationalist-populists of their support. Once again, the West adheres to the time-hallowed principle that rules are for enemies, while friends receive complicity.

Please, do not call this politically induced humanitarian catastrophe a “migrant crisis.” Because it’s not. Instead, it is the outcome of an obstinate clash between a mature authoritarian regime, which runs Belarus, and a nationalist-populist regime with authoritarian ambitions, which runs Poland. The refugees and migrants stranded in the freezing woods between the two countries are not the cause of this conflict, but its tools and victims, caught in-between and abused by both sides.

Beyond the conflict between the very nasty regime in Minsk and the fairly nasty regime in Warsaw, this is also a crisis of the European Union. But not, as talking heads, think tankers, and politicos want you to believe because the EU is under threat from a “hybrid” attack.

Because even with his worst efforts, the scale of the human trafficking that Belarus’s dictator Lukashenko can pull off is simply dwarfed by the resources and the capacities of the EU. If you really believe that a bloc of almost 450 million inhabitants, uniting some of the wealthiest economies in the world is threatened by a few thousand hapless refugees, you don’t need border guards – you need a wake-up call.

No, the real problem for the EU is that it has not done its homework. And the irony is that one of the states that has prepared the ground for its narrative is Poland. What is so overdue is, of course, to finally put together a bloc-wide migration policy beyond deterrence, shady deals, and illegal pushbacks.

The EU knows very well what such a policy would look like: In essence, it would be a system to fairly distribute refugees and migrants among the member states, not according to their changing and biased preferences but their capacity. And Poland has consistently sabotaged the adoption of such a reasonable and robust solution. 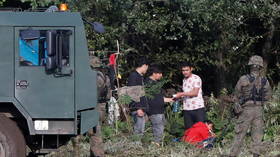 Yet if the EU had such a system, it would not only be able to treat refugees and migrants better. It would also find it easy to ignore the kind of pressure Belarus’s Lukashenko is exerting now. Because it could absorb whatever numbers he could throw at it. His whole tactic would simply be irrelevant. Which, in turn, means that he would either not even try or give up quickly.

Some observers and politicians inside the EU understand and, more importantly, are honest about this link, such as the former president of the EU parliament Martin Schulz. But they do not shape EU policy, unfortunately.

One thing the EU does is engage in, again sheepishly following Poland’s absurd lead, is what is by now a routine tactic of blame-deflecting by implying that somehow the crisis must be Russia’s fault.

Sure, there is no serious evidence for this guess. Moscow and Minsk talk, including about this crisis, and the Russian airline Aeroflot might be flying passengers that turn out to be refugees – as may many other airlines, which, by the way, do not have the right to refuse a ticket on mere suspicion.

But since America used Russia Rage (aka the “Russiagate” fantasy) to compensate for having produced former President Donald Trump, we have all learned that unfounded suspicions and free-association speculation are enough for going public with serious accusations when it comes to Moscow. Russia, so the Commission is “on the radar screen.” Whatever that is supposed to mean.

It is time to get real. Poland is not a victim, the EU is not in danger, Russia is not the problem. Belarus is a problem but a small one. The real big problem is the EU’s long-lasting inability or unwillingness to force xenophobic governments, such as that of Poland, to agree to a reasonable and fair migration policy.