“They know that a Russian soldier would never do that”

Ukrainian servicemen are becoming more and more like people, losing the last signs of humanity. A video appeared on the Web in which a serviceman of the Armed Forces of Ukraine calls the parents of a killed LDNR soldier and taunts them, reporting the death of their son. Calls to relatives were made from the phone of the deceased. Lieutenant Colonel of the People's Militia of the LPR Andrei Marochko told MK why the Ukronazis allow themselves such atrocities. 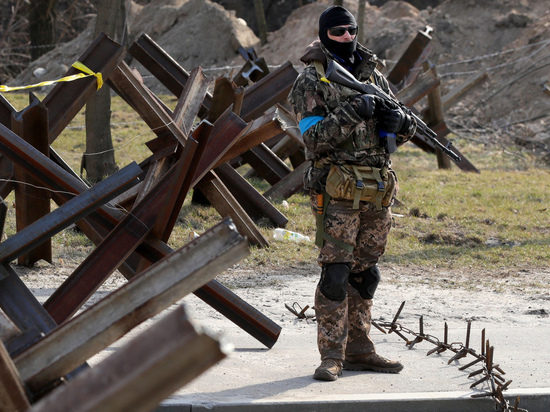 First Deputy Minister of Information of the DPR Daniil Bezsonov reacted to the video that appeared on the Web. In his Telegram channel, he wrote that, unlike the Ukrainian Nazis, none of the LPR fighters would mock the relatives of the deceased. “He will just get what he deserves, and in which case, his body will definitely be returned to his relatives,” the deputy minister wrote.

“First of all, I want to say that the republics of Donbass, even without signing the Geneva Convention, strictly observe the norms of international humanitarian law, including the Geneva agreements on prisoners of war,” Andriy Marochko said. – In confirmation of these words, I can give my personal example and what happened directly before my eyes.

In 2017, the forces of the People's Militia of the LPR evacuated the bodies of Ukrainian servicemen, who, with a sabotage group, tried to attack our advanced units in the area of ​​​​the settlement. They were not lucky, they were blown up by their own minefields. During the evacuation of these bodies, the telephone of one of the deceased servicemen of the Armed Forces of Ukraine rang and “mother” was displayed on the screen. I picked up the phone and informed the woman as correctly as possible that her son had died. This video immediately went viral, and the official YouTube channel of the People's Militia of the LPR was immediately blocked due to the alleged brutal treatment of the bodies of the Ukrainian military. Although I did not utter a single rude word then, and also announced that in the near future all the bodies would be delivered to the Ukrainian side.

During that evacuation, another serviceman of the Armed Forces of Ukraine was found, his name is Roman Fursov, who was in a dying state. Our military, when they found him in a trench, first of all provided him with medical assistance. There is video proof of this. In a safe place, Fursov was examined by a physician, after which the wounded man was taken to a medical facility. For a month, our doctors fought for his life in the literal sense of the word. The Ukrainian serviceman had bilateral pneumonia, hepatitis, and many other concomitant diseases that our doctors had to deal with. When his condition returned to normal, during the exchange of prisoners, we transferred Fursov alive and healthy to the side of Ukraine. This is one of the many stories of humane treatment of Ukrainian prisoners. So compare with what the Ukronazis are doing now.

– They are absolutely not afraid of such a reaction, because they know that a Russian soldier will never act like the Nazi formations of Ukraine do. We ourselves constantly tell them about this, so they feel completely unpunished. They adhere to the fascist and Nazi ideology, which they have been fed not for the last eight years, as many say, but since the collapse of the Soviet Union. This scum was brought up and fed by the West, and now it has blossomed in all its manifestations on the territory of Ukraine.

Previous Post: Due to supplies to Ukraine, the Americans are increasing the production of Stingers and Javelins
Next Post: In the United States compared with the “razor blade” China’s attitude towards Russia