A Russian woman, inspired by the successes of transgender politicians around the world, has been chosen to head a regional branch of the party Civic Initiative, almost a decade after beginning her career as a man.

Yulia Aleshina will now lead the party’s office in the Altai Territory, a picturesque mountainous region in Siberia, around 3,000 kilometers east of Moscow.

Speaking in an interview with tabloid Moskovsky Komsomolets, Aleshina revealed that she was inspired by the success of transgender people abroad. 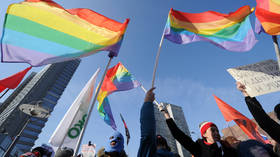 However, despite wanting to protect the rights of LGBT people in Russia, Aleshina doesn’t want her gender identity to define her as a politician.

“I will not base my work on my LGBT image. That is something about me, but I do not want to be a clown. I don’t hide it because I haven’t committed a crime, and I have nothing to be ashamed of,” she said.

Aleshina sought to run for office in 2012 when she – then known as Roman – attempted to get on the ballot for the Barnaul City Duma. Her nomination was rejected due to alleged issues with the nomination form. Almost a decade later, Aleshina is ready to seek office again and plans to run in the Altai municipal elections next year.

Civic Initiative is a center-right party led by Andrey Nechaev, a liberal known for being Minister of the Economy in 1992-93, under then-President Boris Yeltsin. In 2018, the party made headlines by choosing reality star Ksenia Sobchak as its presidential nominee. Sobchak, the daughter of the late Anatoly Sobchak, a former mayor of St. Petersburg whose deputy and right-hand man in the 1990s was Vladimir Putin, came in fourth with 1.7% of the vote.

If Aleshina wins a seat next year, she will follow in the footsteps of transgender women around the world to have been successfully elected into political positions. For example, in September, German Green Party candidate Tessa Ganserer became the first transgender woman to be voted into the country’s parliament.

Previous Post: Migrants on Belarus/Poland border could be getting GUNS from Ukraine – latest Lukashenko claim
Next Post: Japanese plan to invade USSR revealed