UK sanctions on Russians, Saudis are a 'milestone' for human rights, advocate says 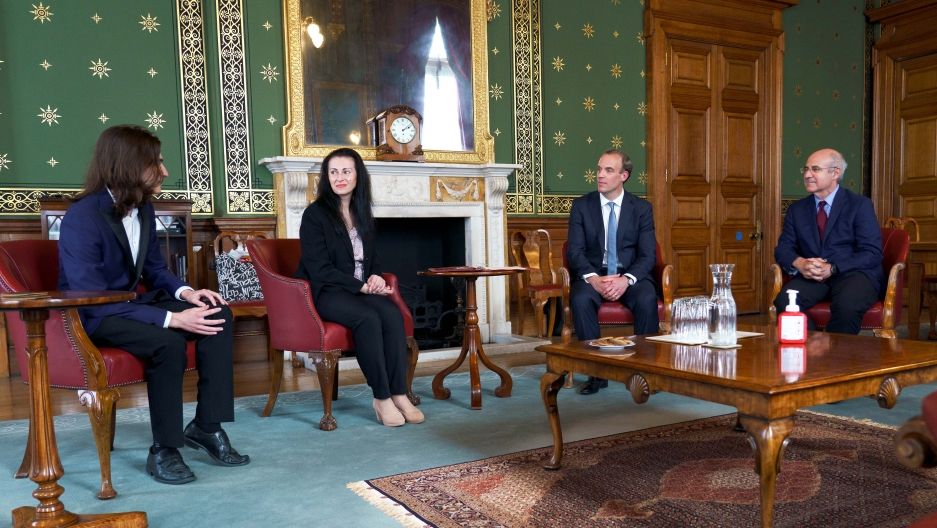 Britain’s Foreign Secretary Dominic Raab meets with the Magnitsky family and Bill Browder in the Foreign and Commonwealth Office, following the foreign secretary’s statement on the Global Human Rights Sanctions regime given in the House of Commons, London, Britain, July 6, 2020.

The British government has blacklisted 47 people associated with human rights violations as part of post-Brexit measures that Foreign Minister Dominic Raab said were aimed at stopping the laundering of “blood money.”

The list includes 20 Saudis accused of involvement in the assassination of Washington Post columnist Jamal Khashoggi in 2018.

Investors from Russia, China and the Middle East have poured billions into London, buying everything from luxury properties to entire companies, but the source of some of the wealth has been questioned by transparency campaigners. Those on the blacklist will now face travel bans and other sanctions.

“If you’re a kleptocrat or an organized criminal, you will not be able to launder your blood money in this country,” Raab told parliament Monday. “Today this government…sends a very clear message on behalf of the British people that those with blood on their hands, the thugs and despots, the henchmen and dictators, will not be free to waltz into this country to buy up property on the King’s Road, to do their Christmas shopping in Knightsbridge, or frankly to siphon dirty money through British banks or other financial institutions.”

After leaving the European Union in January, Prime Minister Boris Johnson wants to forge a new independent role for Britain in foreign and trade affairs and this was the first time London could impose asset freezes and visa bans independently.

Also on Britain’s new blacklist are 25 Russians accused of aiding in the death of Sergei Magnitsky, a Russian lawyer who died in 2009 while imprisoned in a Moscow jail on false charges. The UK’s sanctions are based on the United States’ 2013 Magnitsky Act.

Bill Browder is a British American financier who has been seeking justice for Magnitsky, his former attorney, for years. He spoke to The World’s host Carol Hills on what the sanctions mean.

Related: How Russia laid the groundwork for future disinformation campaigns

Carol Hills: What do you think of Britain’s new sanctions?

Bill Browder: My reaction was one of great joy. We’ve been working to get the British government to do this for 10 years. Britain is a place where the bad guys, the human rights violators and the kleptocrats, particularly like to buy mansions and send their kids to fancy boarding schools. It’s a place that really matters. And for the British government to finally do this is it is a great milestone in our campaign.

Tell us specifically what these sanctions do and who will they affect.

So, the Magnitsky Act does two things. It freezes the assets and it bans the visas of people involved in human rights violations and kleptocracy. And in our particular case, it applies to the people who killed my lawyer, Sergei Magnitsky, who was murdered in 2009 in police custody after uncovering a $230 million Russian corruption scheme. When people are added to this Magnitsky list, they effectively become what I would describe as non-people in the financial world. They can no longer open accounts. Their accounts get frozen not just in the country that they’re sanctioned, but just about everywhere — because all banks subscribe to these databases of sanctions lists. And so it’s become a very powerful tool to even the balance between these dictators and the victims.

This legislation in the UK — is it only to do with people directly or indirectly linked to the killing of Sergei Magnitsky, or is it broad-based legislation applying to other human rights violations?

This was inspired by the Magnitsky case, but it’s now totally broad. It applies to human rights violators everywhere in the world. So, for example, the British didn’t just sanction the people who killed Sergei Magnitsky, they sanctioned the people who killed Jamal Khashoggi, the Washington Post journalist. They sanctioned the officials in Myanmar who are responsible for the Rohingya genocide, and they’ve sanctioned some North Korean entities that are responsible for slave labor in atrocious prison camps in North Korea.

Related: Khashoggi sons’ pardon of his killers is ‘final act in the parody of justice,’ UN expert says

Remind us, what is your connection to Russia, and how did you get to know Sergei Magnitsky?

My connection to Russia is that I went to Russia after the fall of the Berlin Wall to set up an investment management business. It did really well for a long time until I started to complain publicly about corruption in Russian companies. I was then expelled from the country. My offices were raided. I hired Sergei Magnitsky to investigate why they were raiding the offices, the police. And he discovered they raided the offices in order to take the documents and use those documents in a $230 million tax rebate fraud of taxes that we had paid to the Russian government. Officials stole from the Russian government using documents seized by the police.

He exposed that crime. In retaliation, he was arrested. He was tortured for 358 days. And he was murdered on November 16, 2009, at the age of 37. And so after his murder, it became my single and primary mission in life to go after the people who killed him and make sure they face justice. And that’s what I’ve done for the last 10 years.

I know you met a few days ago with the UK’s foreign secretary, Dominic Raab, along with Sergei Magnitsky’s widow and son. What was that meeting like?

It was an extremely moving moment because we’ve all been working on this justice campaign, me and the Magnitsky family, for 10 years. And there we sat with the second-most powerful person in the United Kingdom. And he was there to tell Sergei’s widow and his son that Sergei’s sacrifice wasn’t in vain. That by his sacrifice, the UK government was going to use this law to go after other human rights abusers and Sergei’s abusers, and that hopefully, it will save lives in the future in Sergei’s name.

In the case of Sergei Magnitsky, is it just the four people directly responsible for his death that you’re after? Or is there a kind of an outer circle and inner circle of people tied to his death that would be affected by this legislation?

As of right now, there are 25 people who’ve been sanctioned by the British government for perpetrating the human rights abuses against Sergei Magnitsky. However, there’s another 25 or so individuals who are responsible for the corruption scheme that Sergei uncovered that he was killed for exposing. They have not yet been sanctioned in the United Kingdom, although they have been sanctioned in the United States and Canada. And the foreign secretary promised us today that corruption will be added to the British Magnitsky Act in the fall. At that point, they can then sanction those individuals, too.

Are you ever worried about your own safety? I mean, do you feel like the work you’re doing is risky?

Vladimir Putin personally hates my guts. At the Helsinki Summit with Donald Trump in 2018, when the US asked for the 12 GRU [Russian intelligence] officers to be handed over, who hacked the election, Putin said, “I’ll hand him over if you hand over Bill Browder and 11 Americans.” They’ve been going after me in a big way ever since the Magnitsky Act was passed in the United States. I’ve been threatened with death, with kidnapping. They’ve gone to Interpol eight times to have me arrested. They issued extradition requests, they’ve done all sorts of crazy stuff. I’m definitely a high-value target for Vladimir Putin.

So, what’s next for you? What is your goal with the Magnitsky Act? Let’s say countries across the globe all adopt it— what do you ultimately want to achieve?

Well, countries across the globe have not yet all adopted it, and the main geographic area that hasn’t adopted it is the European Union. The European Union sort of prides itself on its humanity and its morality as an institution. But when it comes to this, they’ve been hamstrung by corruption within different member-states who have been trying to block it. And so I have to get it done across the world and the EU is my next most important target. And I don’t think it’s going to happen quickly or easily. But that’s what we need to get done.

This interview has been edited and condensed for clarity. Reuters contributed reporting.