UK to exclude Huawei from role in high-speed phone network 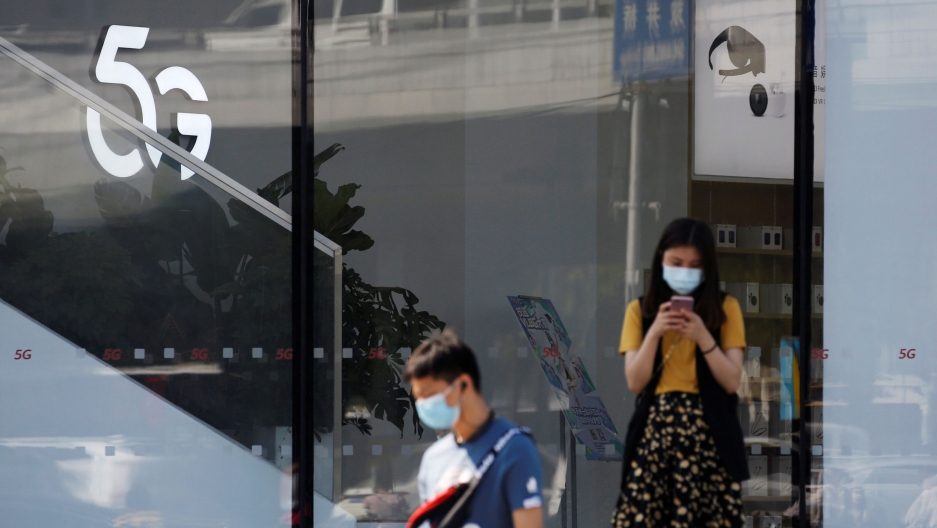 A woman wearing a face mask following the coronavirus outbreak uses a mobile phone outside a Huawei store in Beijing, China, July 14, 2020.

British Prime Minister Boris Johnson announced on Tuesday a ban on Chinese telecommunications company Huawei from the UK’s new 5G high-speed mobile phone network in a decision with broad implications for relations between London and Beijing.

Britain said it imposed the ban after US sanctions made it impossible to ensure the security of Huawei equipment, forcing it to start turning to other suppliers for components. The US threatened to sever an intelligence-sharing arrangement with the UK because of concerns Huawei equipment could allow the Chinese government to infiltrate UK networks.

UK Culture Secretary Oliver Dowden said the decision would delay the 5G rollout, and cost millions of pounds, but that it had to be done.

“This has not been an easy decision, but it is the right one,” he said.

The decision gives British telecoms operators until 2027 to remove Huawei equipment already in Britain’s 5G network. The operators must stop buying 5G equipment from Huawei by the end of the year.

Critically for telecoms operators, the government opted not to order firms to rip out legacy equipment manufactured by Huawei in earlier systems, like 4G. Such a decision might have caused havoc in UK telecoms systems.

Prime Minister Boris Johnson was under pressure from rebels in his own Conservative Party who criticized China’s new Hong Kong security law and its treatment of ethnic Uighurs, as well as Huawei’s links to the Chinese government. Ten Conservative lawmakers sent a letter to Johnson demanding that he remove Huawei from “the UK’s critical national infrastructure.”

Johnson in January sought to balance economic and security pressures by agreeing to give Huawei a limited role in Britain’s 5G network, excluding the company from core components of the system and restricting its involvement to 35% of the overall project.

But the move set up a diplomatic clash with the Trump administration, who threatened to cut off security cooperation unless Britain dumped Huawei. Amid continued pressure to remove Huawei from communication networks entirely, the US in May imposed new sanctions that will bar companies around the world from using American-made machinery or software to produce chips for the Chinese company.

The Labour Party’s spokeswoman on communications issues, Chi Omwurah, decried the government’s flip-flop approach and said it would have a dire impact on the future.

“This is a car crash for our digital economy, but one that could have been visible from space,” she said.

Huawei expressed disappointment, and said that the decision threatens to move “Britain into the digital slow lane, push up bills and deepen the digital divide.”

“Regrettably our future in the UK has become politicized, this is about US trade policy and not security,” said Ed Brewster, a spokesman for Huawei UK. “Over the past 20 years, Huawei has focused on building a better connected UK. As a responsible business, we will continue to support our customers as we have always done.”

The back and forth has put Huawei at the vortex of tensions between China and Britain.

Last fall, the UK called on China to give the UN High Commissioner for Human Rights free access to the Xinjiang region, where most of the country’s Uighur people live.

More recently, Johnson’s government has criticized China’s decision to impose a sweeping new national security law on Hong Kong. Britain accused the Beijing government of a serious breach of the Sino-British Joint Declaration under which the UK returned control of Hong Kong to China in 1997, and announced it would open a special route to citizenship for up to 3 million eligible residents of the city.

“Britain can only be great,” he said, when it has an independent foreign policy, adding that it sets a bad precedent to “make your policy in the morning and change it in evening.”

“It also sends out a very bad message to the China business community,” Liu said, suggesting Chinese companies might think twice about investing in Britain. “They are all watching how you handle Huawei.”

Rana Mitter, an Oxford University history professor specializing in China, said that the security law — combined with broader resentment about the way China handled information about the coronavirus — created increased wariness among Britain’s politicians and the public.

But for China, it’s the way Britain has handled the Huawei issue that is the major problem. Even if Britain decides that buying Huawei isn’t a good idea, this could have been done more discreetly, Mitter said.

“There is a sense, I suspect, in Beijing that the Huawei row has made China lose face,” he said. “And this is one of the things that clearly does not go down well with China, which is, of course, a proud country, the world’s second biggest economy with the capacity to use that economic power when it wants to, and also a country which in general feels on the back foot at the moment because of the COVID pandemic and the world’s reaction to that.”

Before the decision, Huawei announced that its UK chairman would step down early. John Browne’s term was due to end in March, but ex-boss of energy company BP is now expected to depart in September.