An American has been detained by authorities in Ukraine after allegedly trying to hire a hitman as part of a now-thwarted plan to murder a prominent government minister, Kiev has revealed.

Speaking at a briefing on Thursday, Interior Minister Denis Monastirsky said that the assassination bid on Roman Leshchenko, the Minister for Food and Agrarian Policy, was connected to activities from before he became a government official. The suspects who allegedly ordered his murder are said to have been acting on old debts, according to Monastirsky. 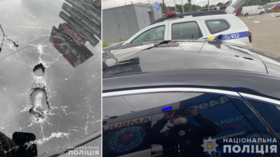 The US citizen, who is the main suspect in the case, is accused of conspiring with a Ukrainian woman to find a contract killer to locate and murder Leschenko. The minister reportedly had refused to pay back money he owed.

Monastirsky, however, disclosed that it was not the duo’s first foray into the world of crime. According to him, the pair had previously ordered the murder of another debtor, but had unknowingly contacted undercover police agents who simulated the slaughter, even showing photos ‘confirming’ that the deed had been done.

Convinced by the cops’ proof of the previous work, the two clients returned to the same ‘assassin’ to wipe out Leschenko. On Wednesday, they met with the “killer” to discuss the details and gave him a sum of $20,000 for the job. They were then busted by Ukrainian authorities.

Leshchenko, who assumed the role of agricultural minister in December 2020, claims that he did not violate any laws and he himself had been the victim of fraud.

The accused have a stack of serious charges piled against them and could face life behind bars. The US embassy in Ukraine has been informed about the detention of their citizen.

In September, the first assistant to Ukraine’s President Volodymyr Zelensky, Sergey Shefir, was reportedly targeted by gunmen while being driven in his car. Shefir said that the attempt on his life “was carried out with the aim of intimidating the highest echelon of power.”