The new delay in approving the Russian-backed Nord Stream 2 gas pipeline to Germany is down to Kiev’s lobbying efforts, Ukraine’s foreign minister has claimed after Berlin’s regulator suspended the certification process.

Speaking to the news channel Ukraine 24 on Monday, Dmitry Kuleba praised Ukraine’s attempts to delay the project’s approval. “Nord Stream 2 should have been operating and earning money a long time ago, but the fact that it still does not work and we are fighting against it is the result of our common endeavors,” he said.

“Together with our partners, we have significantly slowed down the implementation of this project.” 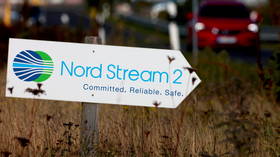 Kuleba also accused Russia of trying to find grey areas in EU legislation and create preferential conditions for the pipeline. He added that Ukraine, as well as Brussels and members of the 27-strong bloc, are united in their demands that Nord Stream 2 must meet “not only the letter, but the spirit” of the EU’s Third Energy Package. The directive outlines the unbundling of the energy supply, the importance of independent regulators, as well as open and fair retail markets.

The minister’s comments come after Berlin paused the certification process of the underwater pipeline last week. It will be halted until the company behind the initiative reorganizes itself in accordance with German law.

Ukraine and Poland have actively opposed the Nord Stream 2 project. The two countries were added to the certification process by the German regulator last week. However, they do not have the power to block its implementation, and can only provide their opinions on the venture. Kiev has also warned it stands to lose billions of dollars if there is a decrease in the volume of Russian gas being exported through the Soviet-built pipeline network that spans the country.

In an interview with the UK’s Financial Times earlier this month, the head of Kiev’s state gas firm, Naftogaz, Yuriy Vitrenko claimed that the new venture increases “the chances of a full-scale war between Russia and Ukraine with all its consequences,” as bypassing the country could mean Kiev is more vulnerable to an “invasion” from Moscow’s forces.

Moscow has repeatedly insisted that the project not only ensures security of supplies, but benefits consumers in the EU. Foreign Ministry Spokeswoman Maria Zakharova said earlier this month that both the West and Russia can mutually gain from Nord Stream 2 without having to give anything up.

Construction of Nord Stream 2, which connects Siberian gas fields to consumers in Western Europe via the Baltic Sea, was completed in September. Once the pumping of supplies is approved, it will be able to transport up to 55 billion cubic meters of gas annually.