Ukrainians who have signed up for Covid-19 jabs are set to receive cash rewards if they come forward and roll up their sleeves, the country’s president has promised, as a sluggish vaccination rate contributes to more infections.

In a video address published on Monday, Volodymyr Zelensky said that people who have been inoculated with both doses will be given $38 each (around €33) to spend in sectors which have been hardest hit by Covid restrictions, namely the creative, sports, and transport industries. 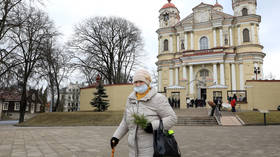 Listing the possibilities of how to spend the financial incentive, the president said that “with this money, you can buy a gym membership, visit a cinema, theatre, museum, concert, or exhibition hall, or buy a ticket to travel around Ukraine.”

The scheme, which has an allocated budget of nearly $227.5 million (almost €200 million), will come into force on December 19. Anybody who was jabbed before Zelensky’s announcement will also be eligible to receive the voucher.

Just over nine million Ukrainians are fully immunized against Covid-19, according to figures from Kiev’s Ministry of Finance, equating to slightly less than one in four of the country’s population. Meanwhile, 30% have received the first shot of a vaccine.

Kiev’s plan to reward its citizens for getting jabbed is not a unique initiative, however. Last month, another former Soviet republic, Lithuania, proposed a jab-for-cash scheme to boost uptake among the elderly population, considered to be at higher risk from the virus.

Russia announced in August it was organizing a Covid-19 lottery, with cash prizes worth around $1,300 per head up for grabs. Deputy Prime Minister Tatyana Golikova remarked that the raffle showed the government’s “gratitude to citizens who have shown they are conscientious, have taken care of their health and protected their loved ones.”