Ukraine is keen to extend its gas transit contracts with Russia’s energy giant Gazprom for more than a decade, the country’s prime minister has revealed, despite Kiev’s ongoing efforts to stop the completed Nord Stream 2 pipeline.

Speaking on Saturday as part of an interview with US state-run outlet RFERL (registered as a foreign agent in Russia), Denis Shmyhal announced that his country’s government is looking to prolong the agreement under which Moscow exports supplies across the Soviet-built overground network.

According to him, the country is “negotiating with our European partners” at present “because the extension of this contract also depends on them.” 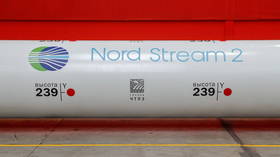 The contract currently in place will guarantee existing volumes and transit fees run until 2024, providing for 65 billion cubic meters of gas in 2020 and 40 billion cubic meters each year from 2021 onwards. The Ukrainian prime minister said it would be ideal to “extend these conditions for 15 years.”

Shmyhal also said Ukraine was prepared to boost gas transit to 55 million cubic meters, if Gazprom wants to take up the offer.

Kiev has openly expressed fears that Russia could cut off its access to transit fees once it begins delivering gas supplies to Western Europe through the recently built Nord Stream 2 underwater pipeline. However, certification of the Baltic Sea link was suspended last week until the company reorganizes itself in accordance with German law. Ukraine has warned it stands to lose billions of dollars if its vital financial lifeline is cut off, and says the delay is down to its own lobbying.

Speaking to the UK’s Financial Times earlier this month, Yuriy Vitrenko, the head of Ukraine’s state gas firm Naftogaz, went as far as to claim that the new project escalates “the chances of a full-scale war between Russia and Ukraine.” According to him, Moscow potentially circumventing its neighbor could make Kiev more vulnerable to an “invasion.” 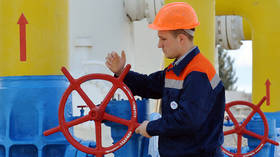 Ukrainian President Volodymyr Zelensky has also condemned the Russian venture and vowed that Kiev will “continue its fight” against the new gas network “until and after its completion.”

His Russian counterpart, Vladimir Putin, however, has attempted to reassure parties that there will be no major manipulation of major gas supply plans.

“Firstly, we should not put anyone in a difficult position, including Ukraine, despite all the complexities related to Russian-Ukrainian relations today,” he said. “Secondly, we should not undermine the credibility of Gazprom as a reliable, absolutely reliable, partner in every way.”

Tensions have flared between the two nations over the past few days, with Kiev claiming that a buildup of Russian troops across the shared frontier with Russia could be a precursor to an invasion. Moscow denies that it is planning such an offensive, insisting that “the movement of some of our military equipment or army units across the territory of the Russian Federation is exclusively our business.”

Previous Post: US rehearsed dropping nuclear weapons 20km from Russian border – Moscow
Next Post: NATO’s mistake is that it still thinks it’s dealing with the weakened Russia of the 1990s