A Ukrainian blogger has come under fire after hosting a lavish party, complete with scantily-clad women, one the same day that millions of victims who died of starvation during famines that swept the 1930s USSR are commemorated.

The celebration took place in the city of Lvov in western Ukraine on Saturday to mark the birthday of local social media personality Alexander Zalisko, who boasts over 1.1 million followers on his Instagram account.

One of the guest’s attending the function captioned a photo of a table overflowing with food on Instagram as “hungry blogger hangout.” At the same time, thousands of the country’s citizens lit candles to mourn what is referred to in the country as the ‘Holodomor,’ or Great Famine. 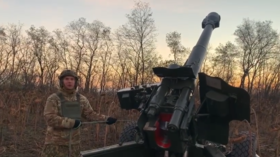 The day commemorates a devastating famine which killed millions of Ukrainians, as well as Russians and Kazakhs, between 1932 and 1933. In recent years, Kiev has insisted that the Holodomor was a deliberate “genocide” enabled by the Soviet authorities under Georgian-born Joseph Stalin, and one that targeted ethnic Ukrainians.

However, this position is disputed by a number of historians, as well as by Moscow, which has pointed out that food shortages had swept the world’s largest nation at a time when the country was going through a period of upheaval and farmers were being purged.

Stepping out to defend the timing of his event, Zalisko, who claimed that one of his raisons d’etre is to party, said that he hadn’t chosen to be born on this day and that he would not postpone celebrating his birthday because of it.

The social-media personality also went on to take a stab at people who post photos commemorating the day on their Instagram, blasting them as hypocritical. “Uploading a story of a candle is memorializing? What is this hypocrisy for? To post a candle and then go out to a restaurant or a pub? To a soccer game or karaoke? And it’s all a blogger’s fault?” he asserted.

“I really respect people who seriously honor the memory of the victims of the Holodomor. They place a candle (not on Instagram stories) and consciously think. But this is such a minority,” according to the millionaire online star.

Also on Saturday, a Ukrainian journalist released a video purporting to show himself in full military uniform and firing a banned large-caliber gun at what, in the clip, he called “Russian occupiers,” to avenge the 1930s famine.

Previous Post: Kremlin outlines who it believes is behind ‘hysteria’ around possible Ukraine invasion
Next Post: Are Russia and Germany set for a split?