Latvia’s parliament has voted to block any of the country’s lawmakers who refuse to get vaccinated against Covid-19 from voting on legislation, with those yet to be jabbed also facing the prospect of the suspension of their pay.

The measure was supported by 62 out of 100 MPs in a parliamentary vote on Friday. Lawmakers will now have to produce a certificate proving their vaccinated status or that they’ve recovered from infection to avoid the sanctions.

“The payment of a monthly salary and compensation will be suspended for a Saeima [parliamentary] deputy, who will not be entitled to participate in the work of the parliament,” a notice from its press office read. Local government lawmakers will also be affected by the directive.

The ban, which will also see unvaccinated MPs shut out of parliamentary discussions, is to take effect on Monday. While it is expected to remain in place until mid-2022, the need for this restriction will be assessed at least once every two months.

According to the legislation’s sponsor, Juris Rancāns, the barring of uninoculated MPs is necessary to promote public confidence in the country’s Covid infection management policy. Nine MPs have rejected immunization, according to state television. 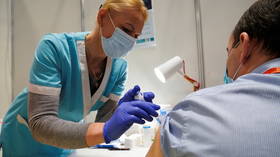 Riga’s latest move against unvaccinated citizens follows Latvian employers being given the green light to suspend or dismiss staff who refuse Covid jabs. As a result of a parliamentary vote last Thursday, workers who fail to come forward to get vaccinated run the risk of being laid off without pay.

Latvia became the first EU member state to reimpose lockdown measures this autumn as soaring infections threatened to overwhelm the country’s healthcare system. Prime Minister Arturs Krisjanis Karins told Latvians “the only way out of this crisis is to get vaccinated.”

The European Centre for Disease Prevention and Control (ECDC) categorized the Covid situation in the Baltic nation of 1.9 million as being of “high concern” on Thursday. Latvia’s inoculation level stands at around 54% of the population, significantly lower than the bloc’s average of 76%, according to ECDC data.