Russia has given the green light for American airlines to lay on flights across the world’s largest country, Washington has claimed, in a move that would likely see Moscow collect large sums in exchange for opening up the skies.

On Thursday, the US State Department announced that Russia has accepted requests made by the American airline association for both international passenger journeys and cargo planes to use its airspace. “Russia approved US carriers’ applications for overflights last week,” officials said, adding that they are continuing “to engage with the relevant Russian authorities to secure expanded air services opportunities for U.S. carriers.” Moscow is yet to comment on the statement.

Earlier this month, Airlines for America, a trade lobby group which includes some of the country’s largest carries, such as Delta, United, American Airlines, UPS and FedEx among others, sent a letter to Secretary of State Antony Blinken. The organization called on him to support efforts to secure the rights to use Russian airspace, adding that flights could be grounded if a deal was not put into place. 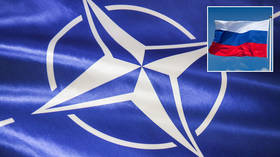 READ MORE: NATO blames Russia for breakdown in relations as Moscow says expulsion of its diplomats has made tensions worse than in Cold War

The news comes amid a growing downturn in relations between the two countries, just days after Russian Foreign Minister Sergei Lavrov said that there is no relationship between Moscow and NATO. The US-led military bloc tore up previous agreements and decided to expel around half of the diplomatic mission at its Brussels headquarters, prompting Moscow to cut ties altogether.

“I wouldn’t call the relations between Russia and NATO catastrophic because to be catastrophic you have to have at least something,” Lavrov explained on Monday. “We didn’t start the deterioration of relations, either with NATO, or with the European Union, or with any country in the West or any other region of the world,” he has claimed previously.

Also on rt.com Moscow’s relationship with NATO can’t be described as ‘catastrophic’ because it simply doesn’t exist AT ALL – Russian FM Lavrov

Last week, the bloc’s Secretary General, Jens Stoltenberg, blamed Moscow for the deteriorating relationship, despite booting out Russia’s diplomatic representatives. “The relationship between NATO and Russia is now at the lowest point since the end of the Cold War,” he said. However, Moscow has pointed to a recently agreed set of secret plans designed to fight Russian forces on land, sea, in the air, in space and with nuclear weapons as evidence that NATO is uninterested in stability.