Washington has handed over 80 tons of ammunition to Ukraine’s armed forces as part of the latest in a series of deliveries under the terms of a multimillion-dollar ‘security assistance’ package brokered by US President Joe Biden.

The load arrived on Sunday, according to the American embassy in Kiev. Praising the handover of the munitions, diplomats took to Twitter to proclaim that “it is a demonstration of US commitment to the success of a stable, democratic and free Ukraine”.

According to the officials, “this was the fourth delivery within the framework of additional security assistance in the amount of $60 million [€52.4 million], which President Biden” granted to Kiev in August. The budget is reserved for weaponry and services provided by the US Department of Defense, as well as military education and training. 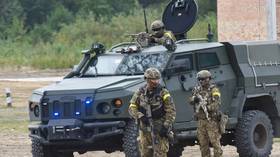 Russia issues warning to US over Ukraine

The latest batch of ammo landed as concerns in Washington rang out over a purported ‘Russian threat’ posed by Moscow to neighboring Ukraine amid an alleged buildup of troops in the region. At the same time, relations have frayed between the West and nearby Belarus in recent days over a sharp spike in illegal migration stemming from the Eastern European nation.

Last week, Moscow warned the US that a new plan to hand over lethal weapons to Ukraine would undermine the chances of peace in the country’s war-torn Donbass and escalate tensions with Russia, after Secretary of State Antony Blinken and Kiev’s foreign minister, Dmitry Kuyleba, signed a deal pledging to “deepen our strategic partnership” and increase “defense cooperation.”

Russia’s ambassador to the US, Anatoly Antonov, said that the ‘Strategic Partnership Document’ signed by American and Ukrainian diplomats was merely “a set of slogans – harmful ones.” According to him, “in almost every line there is a geopolitical tool to oppose Russia.”

Antonov went on to argue that “plans to supply weapons to the regime in Kiev will only worsen the situation in southeastern Ukraine. We believe that another opportunity to encourage Kiev to stop the war has been missed.”