US officials have warned their European counterparts that Moscow may be planning an invasion of Ukraine, with Washington opining that Russia is considering a “military operation,” American business outlet Bloomberg has reported.

Citing unnamed sources, the news agency reported that US officials have briefed their partners in the EU over a “potential invasion,” noting that their concerns were backed by “publicly available evidence” and other information yet to be shared with European governments.

Washington’s fears of potential Russian aggression come during a historic low in relations between Russia and the US-led NATO bloc. 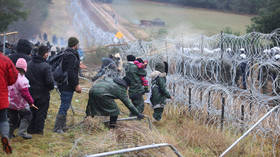 Following the article’s publication, Russia’s first deputy ambassador to the UN told reporters that Washington’s concerns were entirely unfounded, and noted that the country’s armed forces had the right to put troops anywhere within the country’s borders.

“We have never planned [an invasion] and never will, unless we are provoked by Ukraine or someone else, and it is a matter of defending our national sovereignty,” Dmitry Polyanskiy said, according to news agency RIA Novosti.

The report follows accusations that Russia is amassing troops on the Ukrainian border, with US Secretary of State Antony Blinken telling the press on Wednesday that Washington was “concerned.”

“We don’t have clarity about Moscow’s intentions, but we do know its playbook,” he said, during a press conference with his Ukrainian counterpart, Dmytro Kuleba. “Any escalatory or aggressive actions would be of grave concern to the United States.”

Earlier this month, Kremlin Spokesman Dmitry Peskov called reports of a Russian military build-up near the borders with Ukraine “cheap fake news” that should be dismissed.

“It is not even worth commenting on the quality of these reports, and generally, such news should be ignored,” he told the press. “Russia has never threatened anyone, nor is it threatening anyone, and what’s more, it poses no danger to anyone.”