Russia will face harsh consequences if it enters into a military conflict with Ukraine, British Prime Minister Boris Johnson has claimed, amid reports that the country is waging a ‘hybrid war’ on Ukraine, and on Western Europe.

Speaking on Wednesday to members of Parliament, the Conservative leader remarked that “I think it will be a tragic, tragic mistake for the Kremlin to believe that it is possible to get something at the expense of military-political adventurism,” when probed about what other armed assistance Downing Street can provide to Warsaw and Kiev to send a signal to Moscow to prove the seriousness of its actions.

The prime minister stressed, however, “what we need to do is to make sure that everyone understands the price of incorrect assessments [of the situation] at the borders.” A number of Western outlets have warned in recent weeks that Russian troops are massing along the shared frontier, with Moscow issuing a categorical denial. 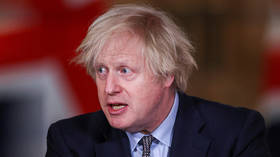 Johnson’s remarks came shortly after Ukrainian President Volodymyr Zelensky met with British Defence Minister Ben Wallace. In a joint statement published by Kiev and London’s ministries on Tuesday, both parties made it clear that “our governments have no desire to be adversarial, or seek in any way to strategically encircle or undermine the Russian Federation.”

The notice, published on the UK government’s website, added that “we are concerned by Russia’s military build-up and activity around the borders of Ukraine,” referring to claims from NATO head Jens Stoltenberg, who alleged on Monday that there had been an “unusual concentration of troops” amassing on Kiev’s demarcation line with Moscow.

A spokesman from Ukraine’s State Border Service, however, quickly dismissed the accusations that Russian forces are piling up in the region and said that if any actions are occurring “it may be dozens or even hundreds of kilometers from” the state’s boundary.

London’s partner in Washington has also weighed in on the unfolding humanitarian crisis on Belarus’ shared frontiers with Poland and Lithuania that has seen swathes of desperate people, largely from troubled Middle Eastern countries, attempt to cross over into the EU. On Sunday, US Secretary of State Antony Blinken claimed that the situation is merely a distraction to deflect “from Russia’s activities on the border with Ukraine.”

Russian officials have rejected claims that Moscow is masterminding an offensive against its neighbor. Earlier this week, Bloomberg reported that Russia, along with Belarus, is engaged in a “hybrid war” against the West. Speaking later on Thursday, Kremlin Press Secretary Dmitry Peskov said that the claims were another example of a “hysterical publication” in the UK. “Russia is not waging any hybrid wars,” he insisted.