Marines from Russia’s Northern Fleet have held tactical firing drills in the frosty Arctic region, the Ministry of Defense in Moscow has announced, with infantrymen taking aim and refining their combat skills on the ground.

In a statement released on Monday, military chiefs confirmed that they had conducted their exercises at a training ground in the village of Sputnik in the Murmansk region of Russia’s Far North. During the training, soldiers fired rounds from Yarygin and Makarov pistols, as well as Kalashnikov rifles, at distances from 10 to 300 meters.

A video posted online by the Defense Ministry captured soldiers shooting their weapons at targets in the snowy conditions.

The drills are intended to put the soldiers through their paces and develop their professional skills, including dexterity, coordination, speed and reflexes in cold climates.

According to the statement, the “Black Berets” are preparing for competitions that various squads, including soldiers of the Northern Fleet’s coastal forces, will take part in.

Servicemen are required to undergo special selection tests on their general physical fitness, psychological preparedness, and core shooting exercises in order to compete. 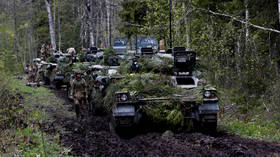 The Defense Ministry’s announcement of the drills comes as Latvia confirmed it was beginning its “Winter Shield” military exercises alongside NATO troops.

The Baltic nation’s national armed forces revealed that howitzers, mortars, grenade launchers, and machine guns will be fired during the drills, as well as a number of planned warplane flights.

Moscow has grown increasingly concerned over the American-led military bloc’s presence close to its frontiers in recent weeks. The Kremlin’s Foreign Ministry spokeswoman Maria Zakharova blasted NATO on Sunday over the freshly announced joint exercises, which will see the Estonian army team up with US Army Special Operations Forces.

According to Zakharova, “Russia has warned NATO against creating tension near Russian borders. NATO is silent and continues undeterred.”