If you want to know how reliable journalists and TV talking heads are, look at their record when it comes to the biggest stories of the past decade: Iraq’s purported ‘weapons of mass destruction’ or the invasion of Afghanistan.

If they told you at the time that Iraq was knee-deep in lethal chemicals and victory over Islamist militias across the border would surely come in another six months’ time, then you have grounds for considering them to be less than reliable. If, on the other hand, they told you that all that WMD stuff was built on shaky ground and the war in Afghanistan would probably end badly, then you’ve got grounds for trusting them.

Once you start doing this, you reach a sad conclusion. The people who got it wrong have risen onwards and upwards to greater things, never having to repent for their errors, while those who got it right have been shoved to the margins. There is, in short, an astonishing lack of accountability for journalistic failure. 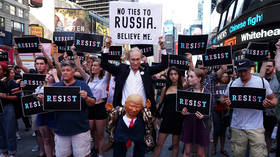 Still, errors need explaining, so it’s interesting to see how people go about it. Roughly speaking, there are three methods: first, deny any error; second, say you never actually believed it; and third, say you were the victim of deception. So, with the invasion of Iraq, you have a few who still maintain it was a good idea; a bunch who claim that they were secret doubters all along; and then some more who argue that the real problem was that Saddam Hussein deliberately misled everybody into thinking he had WMD, so it was quite reasonable to believe it.

Move on a few years and we can see much the same process at work in the aftermath of Russiagate – the breathless scandal that obsessed the American media for the best part of four years, with allegations that Donald Trump had colluded with the Russian state to win the 2016 election. Much like Iraq’s secretive chemical weapons program, proof of collusion has proved embarrassingly elusive. Moreover, as has become very clear, one of the key documents driving the story, the so-called Steele dossier, has turned out to be utterly worthless.

The latest nail in the coffin of the collusion narrative came with the arrest this month of the man who compiled the dossier on behalf of former British spy Christopher Steele, one Igor Danchenko. The reaction of the punditocracy has echoed that which followed the failure to find Iraqi WMD: denial by some; claims by others that they never believed the story; and, last, allegations that the whole affair was a deliberate act of deception by the Russian state.

Prime place among the first group, the deniers, goes to Max Boot. Writing in the Washington Post on Thursday, Boot showed not the slightest bit of repentance for boosting the Steele Dossier, any more than he has previously shown for backing the wars in Iraq and Afghanistan. “Even if the Steele dossier is discredited, there’s plenty of evidence of Trump’s collusion with Russia,” he says.

Paul Pillar, writing in the National Interest this week, likewise claims the dossier was unimportant. Pillar doubles down on what he knows to be the truth, that “Trump and his circle encouraged, welcomed, facilitated, and exploited a foreign power’s interference in a US election.” Incredibly, Pillar concludes that what is needed is, “a well-funded investigation to look into this further,” as if the only reason that proof of collusion is lacking is that we haven’t looked hard enough.

Given just how hard a huge number of people have looked, this is patently silly. But at least the deniers display the virtue of consistency. Perhaps more irritating are those who are now coming forward to claim that, although they didn’t say so until now, they never believed in collusion. They were, you might say, secret, silent sceptics.

Thus, Max Seddon of the Financial Times turned to Twitter to declare that the lesson of the affair was to “listen to reporters on the ground.” “I don’t know a single Moscow corr[espondent] who bought the dossier,” he says, adding that the immense fuss about Russiagate was the fault of “editors” who wasted journalists’ time on the matter rather than on “substantive coverage of Russia.”

the most remarkable lesson of the Steele dossier saga for me was how easily you can launder garbage gossip that wouldn't have made it past a college newspaper editor into the media if you cloak it as Raw Intelligence from superhero spieshttps://t.co/RxZyJmSLhJ

I’m willing to believe Seddon when he implies that he never swallowed the nonsense in the Steele dossier as well as the rest of the collusion narrative. But I have to ask him, “Why didn’t you say so at the time?” Lots of people did. One assumes he’d blame his editors, and I get it – when you work for a media outlet, you’re constrained by what your editors want. But that hardly lets journalists off the hook. All it does is explain why the people who did publicly scoff at the dossier were to be found outside the mainstream media, while the likes of The Guardian’s Luke Harding were earning big bucks writing books on collusion and telling everybody what a great guy Christopher Steele was. But it doesn’t explain why all those journalists who say that they disbelieved the collusion story never called out Harding and co. Clearly something is amiss.

And then, we have the third group: those who claim innocence on the grounds of deception. The logic here is that the dossier was indeed garbage, but very clever garbage dreamt up by Russian intelligence to deceive us all. By spreading stories of Trump-Russia collusion, the Russians aimed to sow chaos and set Americans at each other’s throats.

It is, of course, ridiculous, but that hasn’t stopped many supposedly serious commentators from suggesting it as a means of excusing their own gullibility. For instance, Newsweek’s deputy opinion editor Batya Ungar-Sargon went on air to discuss the “irony of American journalists falling for Russian disinformation en masse because it confirmed what they *really* wanted to believe.”

Thank you so much @KimIversenShow, @ryangrim, @robbysoave for having me @thehill to talk about the Steele Dossier and the irony of American journalists falling for Russian disinformation en masse because it confirmed what they *really* wanted to believe.https://t.co/oS80XGs2t6

For, you see, all those stories saying the Russians were spreading disinformation were themselves Russian disinformation. Damn, but those Ruskies are clever!

The reality is this – the Steele dossier was obvious rubbish from the start, but the mass of the journalistic community either swallowed it wholesale or, alternatively, chose to stay silent about its doubts while allowing the believers to dominate the headlines. Belated claims that “I never believed,” or absurd allegations that the whole thing was a Russian plot, are just excuses designed to deflect blame. If we are to avoid such failures in the future, we need an honest reckoning. Judging by what’s come out from Western journalists this week, it doesn’t seem we are likely to get it.